A fascinating event with a mix of both the Eastern and Western culture, the 2012 Rotary International convention was an exciting and fun-filled event for the more than 35,000 Rotarians in attendance.

During this action packed event, the ClubRunner booth was bustling with activity! From an overview of the latest ClubRunner features and enhancements to the highly anticipated sneak peak of ClubRunner Version 3.0, we had a variety of events taking place at the booth every day! 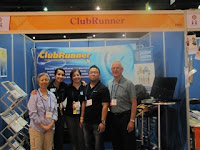 Halle, Sarah & Jeff from the ClubRunner team had an amazing time meeting all of our wonderful customers and listening to all of their great suggestions. In fact, we received some excellent feedback and will work on implementing those suggestions to the ClubRunner service in the near future.

On May 8th, as we began the sneak peak demo of the forthcoming ClubRunner Version 3.0 platform, we had an overwhelming response from both our current and prospective customers. As our unveiling party continued, the crowd at our booth continued to grow and we were ecstatic to see the interest levels of fellow Rotarians peak as they excitedly signed up to become beta testers. We also held demonstrations to highlight the ClubRunner Mobile App and were delighted to see the download statistics double during the convention.

During the five days, we had many people enter to win our mystery prize and it was awarded to Whay Yih from the Rotary Club of Bugis Junction. We also held a raffle to give away 10 free year's subscriptions to ClubRunner and the lucky winners will be announced within the coming weeks.

Thank you to everyone who visited the ClubRunner booth and made this event memorable! We'll be uploading photos and videos from the convention soon. In the meantime, if you have any pictures you want to share with us, join the conversation and get connected with us on our Facebook Fan Page!
Posted by ClubRunner at 5:12 PM No comments:

Did you know that the speakers widget can now display a list of your speakers for the next 6 months?

Do you have feature requests you would like added to our customer wishlist? We'd love to hear from you! Please e-mail your suggestions.
Posted by ClubRunner at 6:46 PM No comments:


District executives can now download a listing of all club executives and officers within the District, by year.


To do so, simply navigate to the Organization tab from the top menu bar and click on 'Define Club Position Types'. Click on the member count for the listing you want to download and then click on the 'Export to CSV' button on the top right.Upon doing so, the data will be available to you in excel format.  Thus if you were looking to download a list of all the Club Presidents, you would click on the member count next to the Presidents column, which would take you to the next screen where a download option would be available. This feature is only available on the District sites. Clubs are still free to create their own positions and can still map those positions to the club positions listing on the District site.


For any questions or feedback, please contact our support team!
Posted by ClubRunner at 6:15 PM No comments: